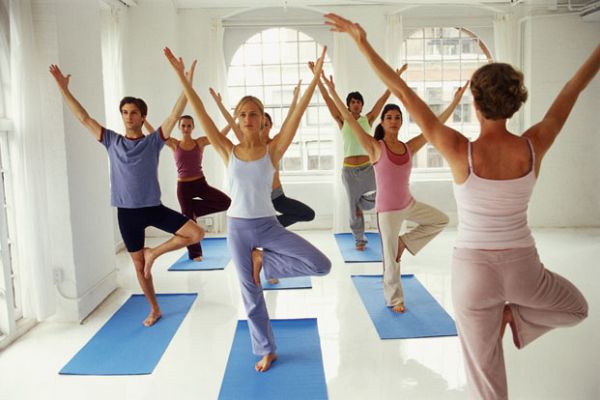 Yoga has been practiced for more than 5,000 years, making it the world's oldest exercise program. In its purest form, it is a mind-body makeover that combines strengthening, stretching, meditation, relaxation and deep breathing, all with the goal of strength, flexibility and a sense of peace.

Although it is typically listed as an alternative and complementary health practice, many traditional doctors support it for their patients, and some insurance companies may subsidize any class fees.

There are more than 100 different types of yoga, some fast-paced, others deeply reflective and relaxing.

Among the more common forms of yoga are Hatha, which combines breathing exercises with movements; Vinyasa, a form that uses poses that help alignment of body and soul; Power, a high-intensity workout; Ashtanga, which mixes posing and breathing; Bikram, which is sometimes referred to as hot yoga because it is performed in a room heated to high temperature; and Iyengar, which uses blocks, straps and other tools to manipulate the body.

When performed correctly, yoga can help strengthen and tone the core, arms, legs, glutes, and back, while improving flexibility, aerobic capacity and strength. A good session should leave the practitioner tired but relaxed. While many people practice yoga at home, there are numerous classes in most cities and suburbs, charging fees ranging from $10 to $25 per class, on average.

The precise origin of yoga is shrouded in mystery, as it springs from mystical teachings that were largely secret and passed along orally. Some of the earliest writings about the practice were transcribed on fragile palm leaves, which are long lost to history. Thus, while most researchers put yoga’s origins at 5,000 years, there are some schools of thought that claim it may be as many as 10,000 years old.