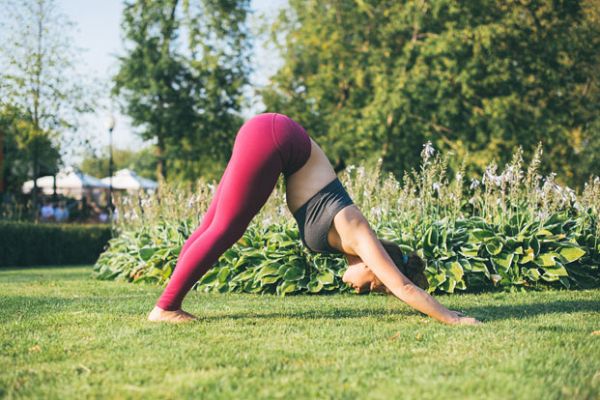 The word yoga, a Sanskrit word that means “union,” is defined as a Hindu spiritual discipline that includes methods of breathing control, meditation, and using specific body postures to achieve improved health and relaxation. Even though the practice has one collective name and an overall set of core principles, there are many different types of yoga that practitioners use to achieve a number of health benefits.

There are many misconceptions about these practices. While its practices may be a part of religions, like Hinduism, yoga itself is not a religion. It is also not merely a form of exercise. Practitioners use yoga to work on their fitness because their belief is that a weak body can hinder their spiritual growth.

Here are the six types of yoga that are commonly practiced.

This branch of yoga is the most popular form of yoga in the United States and is perhaps the type of yoga that we immediately picture when we hear the word. Hatha Yoga focuses on a series of physical poses known as Asana, breathing methods, or Pranayama, and meditation used to achieve a state of calm, improve spirituality, and improve our overall health. Within this branch, according to YogaJournal.com, there are many styles of yoga, including:

-       Ashtanga Yoga. This is a physically demanding practice, where students are taught a series of poses that they practice at their own pace under the guidance of an instructor who makes adjustments to poses and personalized suggestions based on individual abilities. The goal of this practice is to take in what arises in life without either holding on to or outright rejecting it, teaching the practitioner to be unattached to all aspects of life.

-       Baptiste Power Vinyasa Yoga. This type of yoga is an intense, flowing form of yoga that is typically practiced in a 90-minute sequence in a heated room. It aims to tone the body, with physical training serving as a base for facing emotionally and philosophically challenging events that arise in life.

-       Bikram Yoga: This form of yoga is practiced in rooms that have been heated to 105 degrees, in 45-minute sessions that consist of both standing and floor poses, as well as a series of breathing exercises. This practice is meant to force practitioners to put their full concentration on tasks, allowing them to unite their physical and spiritual selves and work on their bodies and minds at the same time.

-       OM Yoga: This style of yoga combines a series of vinyasa sequences with Tibetan Buddhist concepts like mindfulness and compassion, with the goal of building mental and physical strength, stability, and clarity to integrate these concepts into your everyday life.

This branch of yoga is the most popular form of yoga followed in India and is the spiritual practice of Hinduism that focuses on building a love and devotion toward God. It is solely motivated by a desire to please God, without the hope or plan of a divine reward or punishment. According to Wikipedia, practitioners strive to achieve a state of spiritual enlightenment through attaining a “oneness” with God. Unlike other forms of yoga, this form offers the ordinary person the easiest path toward spiritual liberation and focuses on finding the divine in everyone and everything. At the same time, it works on developing love and acceptance for all things. This branch of yoga is ideal for those who are seeking to discover spirituality.

The name for this type of yoga translates to “royal” yoga and is considered by many to be the highest form of yoga, practiced by the fewest number of Hindus. This strenuous practice, adhered to by a number of practitioners who are members of religious or spiritual orders, focuses on training the mind and withdrawing into the highest states of spiritual life. This branch focuses on moral, physical and mental discipline, which are taught in a series of eight steps or stages. A Raja Yogi sees himself as a master of himself, achieving self-respect while learning respect for all of creation. This branch of yoga is perfect for those who want to learn self-discipline.

Yoga of the Mind

This branch of yoga focuses on a knowledge of Brahman and Atman – or the cosmic soul and the individual soul – and the realization of their unity. Jnana yoga focuses on fine-tuning the mind and building knowledge – not in the sense of book knowledge – but rather a spiritual knowledge and understanding of the interconnection between all things and our relationship to God. Jnana yogis use their training to teach the mind to discriminate between what they perceive to be the real and the unreal, the permanent and the transitory, according to Vedanta.org. Jnanis search for divinity in themselves and believe that because God is a part of each of us, we need not look outside ourselves to find spiritual divinity.

Devotees of Jnana yoga are open to studying other philosophies and religions because their belief is that they must use an open and rational mind to gain knowledge about the spirit. They use wisdom and intellect as tools to surpass their personal limitations.

Devotees of karma yoga believe that our present station in life is a direct result of our past actions, in past lives. As such, they believe that a life of service is the best way to be rewarded in a future life, and they devote themselves to performing selfless acts. According to the Sanatan Society, karma yoga involves giving up the ego to serve the divine in all parts of life, whether man, animal, plant or inanimate object. Otherwise phrased, this is the yoga of “doing the right thing.”

This form of yoga focuses on choosing a path in life that is driven by consciously doing the right thing and expressing love and kindness in all parts of our lives. While other forms of yoga focus on our intentions with thoughts and feelings, this form of yoga is based on our outward actions. It is believed these actions are the tools to changing our destinies.

This is perhaps the most misunderstood branch of yoga. Americans almost always associate it with sex. In fact, tantra yoga focuses on using rituals to immerse oneself more fully in all sacred experiences.

Depending on your overall goals, there are many forms of yoga that you can explore to suit your individual needs and abilities. And with its growing popularity, access to a yoga instructor is no longer an issue with the popularity of the practice. If you don’t have the time or resources, you can also research your chosen branch of yoga online and become self-taught.