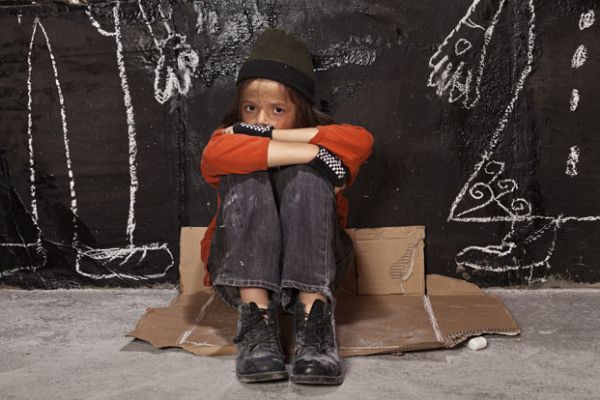 If you’ve reached this conclusion, you might want to reconsider. The cold, hard facts surrounding poverty in the United States are clear-and very disturbing.

When we think of poverty, images of far-off worlds come to mind. But poverty is a very real thing right here in the United States. And the statistics surrounding it are nothing short of terrifying.

According to the U.S. Census Bureau, nearly fifteen percent of the population of the United States lives in poverty. That translates to about 46.7 million people.

Even more concerning, living in poverty comes with a plethora of health risks. That’s because experts say that poverty and poor health go hand in hand.

It’s like an endless round robin of sorts. Poverty is said to raise one’s chance of suffering from health issues; and these health issues keep people in poverty.

The question is: why are so many health risks associated with poverty?

One of the first reasons that poverty affects health comes in the form of simple nutritional deficiencies. In short, if you’re poor, it can be expensive to buy nourishing foods. As a result, you’ll probably choose processed foods and other numbers-oriented convenience options designed to feed a large family and last for the greatest amount of time possible.

So just why is this nutritional issue affecting our nation’s poor?

According to Think Progress, “many of the poor, including those who rely on food stamps, have to patronize bodegas or mini-marts that sell salty snacks and the kinds of processed foods  that cause hypertension, obesity, and diabetes in lieu of fresh produce.”

This has given rise to a widely used term called food deserts. Food deserts are large areas that lack easy access to fresh foods. In other words, it can be tough to eat healthy in these areas because fresh foods simply can’t be found.

“Food deserts are defined as urban neighborhoods and rural towns without ready access to fresh, healthy, and affordable food,” according to the United States Department of Agriculture (USDA) Agricultural Marketing Service. “Instead of supermarkets and grocery stores, these communities may have no food access or are served only by fast food restaurants and convenience stores that offer few healthy, affordable food options.”

The USDA says that approximately 23.5 million people are living in these areas. And over half of these people are considered to be low-income. Further, 2.3 million of these people live in rural areas with a driving distance of more than 10 miles to a grocery store. If you consider that some of those living in these areas may not have cars, this is a terrifying reality.


But nutrition isn’t the only area of concern when it comes to health risks and poverty. Also of concern is the diagnosis (or lack thereof) of life-threatening illnesses.

Think of it like this…if you’re struggling financially, you’re probably not going to buy health insurance. This means that you’re not going to see a doctor regularly. As a result, you’re going to miss out on routine health examinations. So things like high blood pressure, diabetes, and high cholesterol won’t be caught. Medical treatment will take backseat to the fear of more debts and financial constraints.

Plus, those who live in poverty have higher rates of depression than those who are financially secure. In fact, this has been said to be the greatest health risk of poverty.

Research compiled through a 2011 Gallup poll concluded that nearly 31 percent of Americans who live in poverty are depressed. But only 15.8 percent of those not living in poverty have received this diagnosis. This means that if you’re poverty- stricken, you’re twice as likely to struggle with this debilitating issue.

This can create yet another round robin effect. In general, depression can put a damper on workplace productivity. So those in poverty can be knocked down even further when it comes to succeeding in a career and making life changes necessary to rise above poverty. (And that’s if they can keep even a job at all. Remember that those who are depressed are often unable to work.)

Further, statistics regarding other mental illnesses and poverty are alarming. The World Health Organization (WHO) reports that when compared with those of the highest socioeconomic status, those of the lowest socioeconomic status are eight times more likely to develop schizophrenia. That’s a terrifying statistic. Add that to the expenses associated with treating a mental illness in general and this can make having the courage to seek help seem impossible.

According to Partners Healthcare Asthma Center, there may be a number of reasons why those living in poverty have higher rates of asthma. For starters, exposure to asthma triggers may be higher in poor households. For example, roaches and poor air quality may be present. In addition, exposure to smoke and chemicals may be greater. Plus, mold and other factors may play a role in this process. If it rains, for instance, a leak may be too expensive to fix, which could lead to poor air quality in terms of treating and ridding a home of mold growth.

Smoking is yet another issue that affects the nation’s poor. In fact, one study says that you’re more likely to smoke if you’re poor. A 2010 CDC estimate concluded that nearly thirty percent of those living below the poverty level smoke.