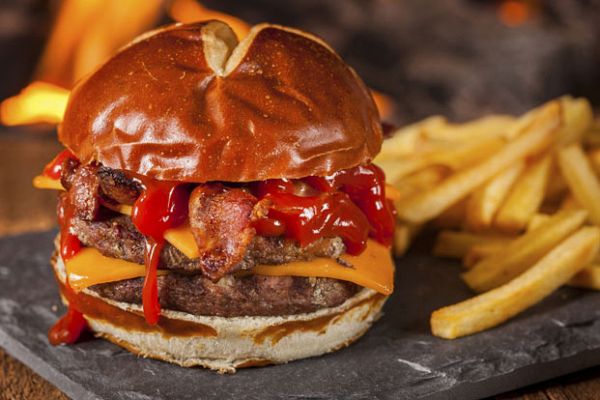 You know how everyone says that breakfast is the most important meal of the day? What if it were your only meal of the day? Well, order Burger King’s Ultimate Breakfast Platter and get nutritionally set for today and perhaps a bit of tomorrow. The number of calories on this platter is three-fourths the daily recommended total, so you’re probably good there. Here’s the tally for this dish: total fat is 129 percent of the recommended one day's fat allowance, with saturated fat coming in at 150 percent, cholesterol at 168 percent and sodium at a lowly 122 percent. The good news: You get 40 grams of protein, which is 80 percent of the daily recommendation.

The example above is just one of hundreds found on fast-food restaurants’ online menus. With almost 264,000 fast-food eateries in this country that have an annual revenue of $100 billion, it is almost inevitable that eight out of 10 Americans eat fast food at least once a month -- in most cases, more often. But did you know that eating fast foods just twice a week will increase your risk of diabetes, cardiovascular disease and other chronic problems?

Fast foods are famously high in sodium, which can be found in various forms, such as salts, monosodium glutamate (MSG) and MSG substitutes labeled as “Autolyzed yeast extract, hydrolyzed proteins, textured protein and natural flavors.” Lots of MSG. In fact, Kentucky Fried Chicken was deemed to be the “worst offender in the industry,” according to Natural News magazine. The U.S Department of Health and Human Services sets the daily limits of sodium at between 1,500 mg to 2,000 mg -- less if you have kidney or heart disease, are African-American or have hypertension. Food chains are able to conceal MSG by using other additives that provide free glutamates, which then mimic MSG in the body.

Example: Kentucky Fried Chicken’s Chicken Pot Pie. Sodium content is 1,970 milligrams. Taco Bell’s new offering, the Sriracha Quesarito, gives you a sodium dose of 1,720 mg. Hardee’s new one-half pound Bacon Cheese Thickburger gives you more than the recommended dose by piling on 2,020 mg of sodium. Sensing a pattern here? Yep, some foods may be getting saltier, but the truth is that Americans prefer their foods about twice as salty as experts recommend. We use an average of about 3,400 mg of sodium a day.

What most people don’t know is that we naturally produce MSG in our bodies – it is the most common form of amino acid. Adverse reactions to MSG include hives, possible seizures, vomiting, skin rashes, asthma and heart irregularities. If the kidneys can’t excrete sodium fast enough, excess sodium can build up in the bloodstream. This makes the heart work harder, causing a rise in blood pressure and possibly leading to heart disease.