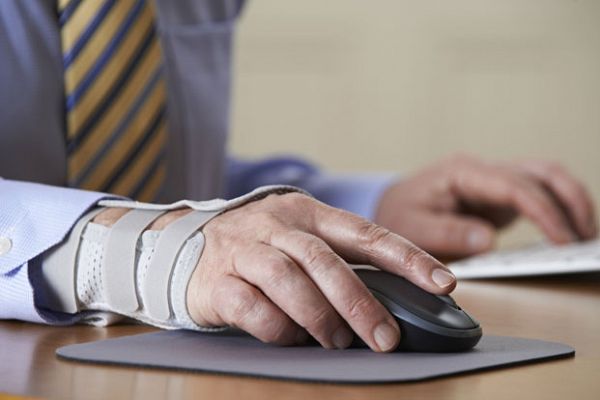 Many people experience carpal tunnel syndrome while typing away furiously. Suddenly, there’s a pain in the upper wrist or arm, creating a tingling sensation for some, numbness for others, severe pain for still more. Those symptoms are announcing that the typist has joined the dreaded carpal tunnel syndrome club.

Carpal tunnel syndrome is not a club to which anyone wants to belong. It is caused by a pinched nerve in the wrist, and can be debilitating to some, career-ending where repetitive motion is required, and limiting to others in what they can accomplish before the condition flares up.

The United States Occupational Safety & Health Administration ranks musculoskeletal disorders like carpal tunnel syndrome among the most frequent work injuries. These injuries also include tendonitis, trigger finger, tendinitis, rotator cuff injuries, and back strains and lower back pains are among the injuries suffered by workers on the job. Nearly two million such injuries occur each year, according to the Occupational Safety & Health Administration.

Carpal tunnel syndrome is caused by several factors. It can be the result of the wrist’s anatomy, how the hand is used, and even the byproduct of underlying health issues. Once it begins, it is difficult to get rid of and requires a long period of treatment to ease symptoms.

The carpal tunnel is actually a narrow passageway located on the palm side of the wrist. Bound by bones and ligaments, the tunnel is the protection for a main nerve in the hand and nine tendons that bend the fingers. When that nerve becomes compressed, it leads to the symptoms of carpal tunnel. The onset is usually gradual, with numbness or tingling in the first iterance affecting the thumb, index and middle fingers. The symptoms will come and go, but gradually worsen and become more frequent.